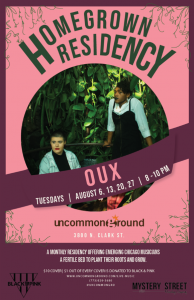 Homegrown Residency at Uncommon Ground is a weekly residency offering a emerging Chicago musicians a fertile bed to plant their roots and grow. Every Tuesday for one month, a new emerging band tests their new material, reveals their ongoing process and are joined by hand picked musical guests as listeners enjoy beer from Greenstar Brewery, the first all organic brewery in IL, and food from the first 4-star restaurant with a certified organic rooftop farm in the U.S. On top of this, 10% of the proceeds go towards a non-profit organization chosen by the resident. This month, Oux has chosen to support Black and Pink, which is a non-profit group whose mission it is to “abolish the criminal punishment system and to liberate LGBTQIA2S+ people/people living with HIV who are affected by that system, through advocacy, support, and organizing.”

Oux is a Chicago/LA based, experimental hip-hop/pop duo influenced by artists like Bjork, Childish Gambino, Frank Ocean and SOPHIE. They released their first single “i sleep skeptical,” in January of 2018, and followed it up with a second single “mosquito bites,” in March of 2018. They began performing live at Chicago house shows and venues in August of 2018 when Natalie Finamore moved to Chicago from LA.