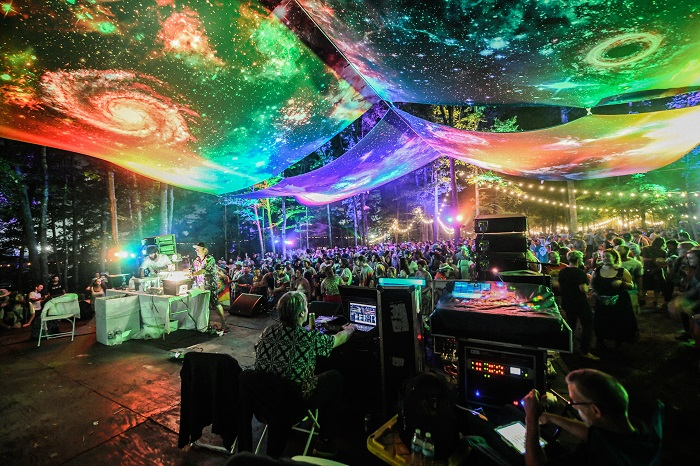 “Jerry Dance Party is a chance for music lovers to experience the mind-bending marriage of cutting-edge audio-visual technology with the timeless music of the Grateful Dead.” -concert promoter and Relix publisher Peter Shapiro.

From its inception, The Jerry Dance Party has brought together the best of Jerry Garcia, from his extensive and wide ranging career with the Grateful Dead to his work with Old & In The Way, Jerry Garcia Band, Merl Saunders, John Kahn, New Riders of the Purple Sage and many more. Each and every venue where The Jerry Dance Party takes place features state-of-the-art audio combined with a mind-bending light and video experience curated to accompany the music for this unique experience.
And while DJ JerrBrother’s late-night dance parties predate the LOCKN’ Music Festival, it was there in Virginia in 2013 where new life was breathed into the show.
Since then, The Jerry Dance Party has taken over venues across the United States. The
technicolor gathering has popped up at Brooklyn Bowl, Brooklyn Bowl Las Vegas, Fare Thee Well at Soldier Field, The Capitol Theatre, and most recently as a sold-out after parties for Dead & Co. and Phish at the immersive, psychedelic, audio/visual venue ZeroSpace in NYC. This summer, The Jerry Dance Party will make stops in Asbury Park (May 23-24), LOCKN’ Music Festival (June 18-21), Boulder, Colo. (July 11th), Chicago (July 24-25), Boston (Aug 7-8), and more TBA dates. Just like Jerry accomplished in his playing, no two Jerry Dance Parties are alike.